I'm really an outer space guy. When I see any planet in sky, I stop whatever I'm doing and can't help but stare at the planet thinking that what must life outside Earth look like. Sky really fires me up in this way.

Aboard the Saturn V rocket, which to this date has an unbeaten record of payload capability, were NASA astronauts Neil Armstrong, Buzz Aldrin and Michael Collins. On July 21 at 02:56 UTC, Neil Armstrong did the unthinkable: he stepped on a celestial body that the human race would never have been able to step on without the development before the launch: Cold War with Russia.

Indeed, the only war in history which may have been stressfull to live with, but bore fruits sweeter than we could have ever imagined. We all know that 10 years from 2019, man would've stepped on Mars. But I'm sure nobody would have thought in 1959 that 10 years later, man would step on Moon? The rate at which technology improvements picked up in that decade is mind boggling.

Cold War was a very tense period to live in, but the Space Race that began from the war has inspired humans forever. Not only the Apollo 5 launch, Yuri Gagarin's space visit and more recently SpaceX Falcon Heavy launches (and returns), are testimonies of the fact that nothing is impossible if you've got courage, strength and craziness beyond limit.

If these astronauts can risk their lives to achieve major things like these for humanity, then who are we to not face our fears?

I'll sign of with the plaque on the Lunar Plaque which Neil and Buzz left on moon.

Here men from the planet Earth first set foot upon the Moon July 1969, A.D. We came in peace for all mankind. 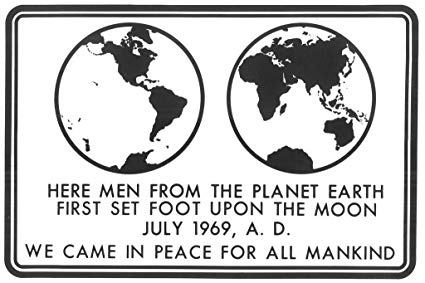 I'll reach out to you as soon as I can.